Those of us that are full-time voice talent do a lot of different types of work. TV and radio commercials, E-learning, and a lot of Message on hold and Interactive voice response work.

Renaming a few of these files manually is fine, but then you’re looking at hundreds or even thousands of audio files with names like that, it can be a daunting task.

“Dammit, Jim I’m a Voice Talent, not an editor!” (Sorry….my original-Star-Trek geek is coming out! 😉

Up until now there really was only one piece of software that was up to the task: VoxStudio. It’s a great program, but at over $500 (399€) it’s pricey. And unless you do A LOT of telephony work it might not be worth the expense.

I spent most of the month of December 2008 working with the developer of W2, Hervé Chain (RV to his friends! ;-), giving him suggestions as to what I – as a voice talent – would want in a program like this. With each upgrade/revision that he made to the program, I told him what was working and what wasn’t.

I have to say that when it comes to customer service, Hervé gets an A+.
YES! The French can be nice, helpful and fun to work with!

Whenever I had an issue or a question, he was right there with an answer and was open to all of my suggestions. Personally, it was a real blast to see suggestions that you make as a user, actually appear in a product!

At $295 it is a powerful program that is really well suited to what we do as voice talent:

• We get scripts in either Word Table .doc format or Excel spreadsheets – W2 imports scripts in both formats.

• We record many files at once – W2 can import up to 500 file names and associated prompts/paragraphs at a time in batches. This means that if you have 2000 files to record it imports the first 500 file names/prompt scripts, you record them and then it automatically imports the next 500. No need for YOU to manually cut-up the script. This was a major upgrade for the first version.

• We need to provide separate files with individual names – W2 names the files as you record them based on the imported recording script.

• We don’t want to name files manually! Did I mention that W2 names the files as you record them?

W2 has few other features that may seem minor to an outsider, but are a real plus in my book:

• You can adjust the font size within W2, no need to play with text wrapping and cells in the original excel spreadsheet.

• You can type corrections/additions to the script within W2. This is great if a missing word or misspelling is messing up your recording flow! You can then export that corrected script from W2 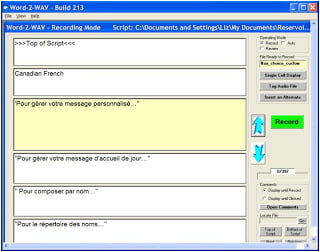 • It has a counter – so if you’re recording 500 files you can see how many files you’ve recorded already. (You can thank yours truly for that little addition!)

• You can see the content of more than one cell – If you record foreign language scripts like I do, you can either have the translation imported into the same cell you are recording from or have it come up as a separate “comment” – this is very handy for some phrases that can be said different ways depending on the context.

• You can choose from several bit/sampling rates to record in. 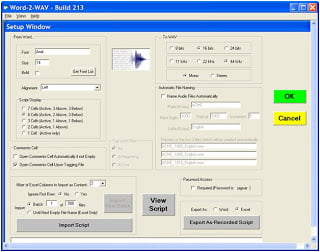 • You can record an alternate take on the fly and W2 will create a separate audio file, naming that file with the original file’s name and “ALT” after it.

Keep in mind, this is NOT an audio editing program.

In other words, once the files are recorded you must use your own preferred editing program (Audition, Audacity, ProTools, SoundForge, etc) to edit & cleanup the files.

You may need to get used to the fact that you don’t see a meter as your recording, but as voice talent, we’re pretty consistent, so after recording a file for level, you can be pretty sure that your levels will be fine.

A Tip: If you’re importing a WORD .doc, make sure there are no “page breaks” in the script. W2 will see the first one as the end of the script (ask me how I know! 😉

The trial version will expire after 30 days but you’ll be able to put it through all its paces in that time. And as I said earlier, Hervé is very open to suggestions & comments.

In the interest of full disclosure: After all the input I gave him, but before this review was published, Hervé gave me a permanent licensed version of W2. I will tell you though that I would have bought the program anyway. It is well worth it.

I am now off to record a 9000 word French e-learning narration that needs to be cut up into 401 separate files.

You know what software I’ll be using!