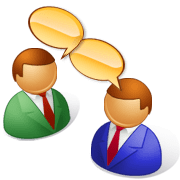 OK, let me get this out of the way right now, so that it cannot be said that I did not “admit” this from the start:

There, I said it.

But I AM a person who speaks more than one language due to parents & teachers who felt that this was important to my development and to my education as a whole.

Given that I use two of my languages in my work every day – I am a full time bilingual voiceover artist – I can say that speaking more than one language is vital to my everyday life.

Given that I grew up multi-lingual (I use my English & my French every day, but I can also carry on a conversation in Russian, and my German & Hungarian can “get me around”) I have been interested in languages and their influence pretty much my entire life.

I think there is confusion between what is being called “bilingual education” in the press, and the teaching of a second language for its own sake in school.

When one sees “bilingual education” mentioned, it usually refers to what we used to call “remedial” education. The teaching of English to kids at school, who speak another language at home.  How can immigrant kids learn English correctly if they are not taught it in school? They can’t. So it makes sense to teach them well.

I firmly believe that if you live in a country, you should be able to communicate effectively in the language of that country. BUT, that is NOT mutually exclusive with my other belief that if you have the opportunity to learn another language you should grab it.

Those who are against “bilingual education” seem to believe that no other language should be taught in school. Let’s not throw the baby out with the bathwater.

How can kids who came here with their families from abroad learn English? In school.  Great. Teach them, tutor them, and immerse them.  Does that mean that they should never be in an “English Only” class room. I don’t believe so.

Should kids who come to this country and are enrolled in school be given help? Absolutely! Should they also be expected to function in U.S. society in English? Yep. Should they be expected to give up their native culture and language in the process? NO!

Should U.S. students who are behind in English (the subject) be given help? Absolutely! Should they be expected to graduate high school being able to read & write in English? Yep. Should they be required to give up an opportunity be to a part of our global society by remaining solely mono-lingual in the process? NO!

How many people had grandparents who came to this country and wanted to “assimilate” so they never spoke their native tongue to their children?  What a loss of cultural identity and opportunity to communicate and experience the world.

Kids pick up languages very quickly. Those of us who spoke a foreign language at home, but lived in the States learned how to communicate in both worlds. And I believe we’re all the better for it.

Being part of the global village means understanding each other. That means both on the level of language and culture. Language & culture are inextricably linked. The more varied your vocabulary (culture and language-wise), the better you’ll function as a citizen of the world.

So let’s help the kids whose families came here for a better life learn English well.

Let’s also give American kids the opportunity to really participate in the global village by teaching them another language.

And if you already speak another language and you have kids, speak it to them.